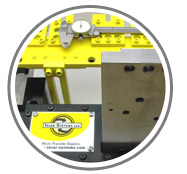 Established in 2007 by Bob Gunst, Jacar Systems LLC is a leader in transfer die automation and a specialist in the die mounted transfer industry.

For 15 years, Bob was told by experts in the transfer industry that the development of a small, economical alternative to large industrialized transfer systems was impossible. Convinced that he could engineer systems to have a footprint 1/4 of the size, Bob set out to develop Micro Transfer ® , a standardized, all-mechanical in-die transfer system.

The first concepts of Micro Transfer ® were sketched out at night on Bob’s kitchen table. Three-to-four years and more than a million cycles of testing later, Micro Transfer™ received its patent and became a secret weapon for many in the stamping industry.

Today, Jacar’s Micro Transfer ® System has revolutionized the stamping industry through its affordable cost and efficient all-mechanical design. Bob proved that the “impossible” could be achieved through the right formula of vision and dedication.